Yesterday morning, I was in a sleepy haze, when I heard Wil come in the door from work around 5:00am.

“Babe,” He said “Uh…there’s a cat outside our door. He’s really cute.”
“No…” I grumbled “We can’t keep him.”
“But, I don’t know what to do with him…I’m gonna feed him. I think he’s hungry.”
“Okay…but don’t bring him in here…” I said drifting back off to sleep.
A few hours later, there was a knock at my door, it woke me up. It was our neighbor from downstairs.
“Hi!” She said cheerily “Is this your cat?” Before I even looked down to see what cat she was talking about, I said:
“No, no, no…he’s a stray…” then I glanced down and saw him. 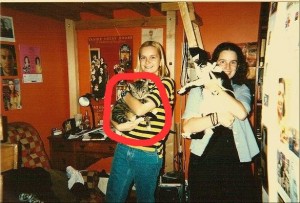 “Oh! He’s not our cat, he’s my parent’s cat…uh…Dusty.” I was clearly not awake, my hair was sticking up, and I was wearing a gross tee-shirt and pajama pants.

“Thanks–thanks so much. I’ll bring him back…have a great day.” She smiled politely, went on her way out the door, most likely thinking that I was a giant slob.
I walked the formerly homeless cat known as Dusty back downstairs to his rightful owners.
**Later that day**
We were downstairs at my parent’s place playing in the backyard. I was also attempting to multi-task by doing laundry. When Ari came back inside the house, he left the garden door open and Faryl the cat escaped! 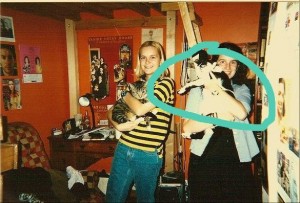 Try as I might, I could not lure Faryl the cat back in the house. I called to him, I opened a can of tuna, but he was not having it. Ari even tried to help me to get Faryl back in the house. But he ended up scaring him away. At the sound of Ari’s voice, Faryl ran under the deck in my parent’s garden.

I called my mom and told her what was going on. She said not to worry and that she would rescue Faryl from the depths of the Fader Garden when she returned home.
I received a voicemail in the wee hours of the evening, yesterday, from Liz Fader informing me that she had captured Faryl and returned him home.
May 3, 2011 will go down in infamy as the day two cats escaped! Also, it was my friend Xylia’s birthday.