After our banner day yesterday, we were settling in to go to sleep. I went to give Ari a kiss good night and he yelled:

“Don’t kiss me!”
This was especially strange, as Ari loves kisses and hugs from me.
“Why don’t you want me to kiss you?” I asked.
“I hurt.” He replied in a soft whimper.
All of a sudden I noticed that the right side of his neck was twice the size that it normally is.
“Oh my G-d!” I exclaimed. I reached out to touch it and he screamed:
“Don’t touch it! It hurts!”
“Is that why you were crying when we were walking home?” I asked.
“Yeah…” he said softly.
I don’t know what came over me, but I started bawling. I felt awful. I completely misjudged the situation. He was being defiant, for sure, but there was a reason behind his behavior. He was in pain and I didn’t realize it.
“I’m so sorry,” I managed to say between sobs.
He cried too. We held each other.
“It’s going to be okay.” I said. I called the pediatrician’s office. It was after hours, so I spoke to the doctor on call. She said it was probably a swollen lymph node, but to bring him in the next day. When I got off the phone, I called Wil at work and told him what was going on. He was really worried.
“Does he have a fever?” He asked. I could hear the anxiety in his voice.
“99.3.” I said. I took his temperature before I called the doctor. I reassured Wil that we were going to the doctor in the morning and encouraged him to stay calm.
Ari and I read Tikki Tikki Tembo and went to sleep. In the middle of the night I felt his forehead, and though I didn’t take his temperature, I could tell that his fever had gone up from 99.3. He was burning up.
Today we went to the doctor and my dad watched Samara. When we got to the doctor’s office it was a struggle to get Ari into the exam room. He wanted to stay in the waiting room with the lollipops and toys. I had to carry him, literally kicking and screaming, into the exam room.
The doctor said it was probably strep throat, but she wanted to do a test to make sure. Regardless, he would need antibiotics because his lymph node was extremely swollen. She attempted to open Ari’s mouth with the tongue depressor.
“Ari, say aaaa!” She said.
Ari clenched his teeth closed and screamed and cried through his shut jaw.
The doctor called in for reinforcements. There were now three people, the doctor, and two assistants trying very hard to get my child to open his mouth, but to no avail.
He covered his mouth, he kicked, he screamed, he refused to leave my lap. He held onto me like a baby monkey. I rubbed his back. I told him if he let them look in his mouth, he would get cat cookies when he got home, but no amount of bribery worked. The doctor finally gave up on the strep test, and prescribed antibiotics to treat his symptoms.
We don’t know whether or not he actually has strep, but we do know that he has an infection in his throat. We know that he is in pain.
He won’t let me near his neck. I feel so badly for him.
When we got home, my dad helped me give him the liquid antibiotics and Children’s Motrin for the pain. It was the same struggle all over again that I had experienced at the pediatrician’s office. One of us had to hold him down and the other had to medicate him. We took turns.
He’s sleeping now. 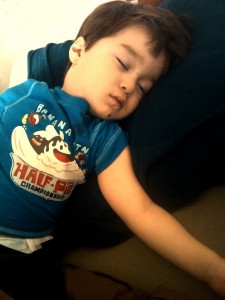 The doctor said it’s highly unlikely that Samara will get what he has, but to wash our hands well just in case. 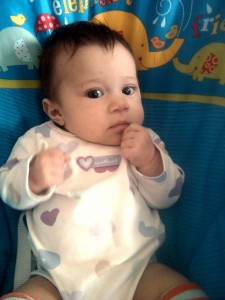 Here’s hoping he feels better soon.
Are your kids challenging at the pediatrician’s office?