This morning I called 311 to inquire further about how to fix the error on Samara’s birth certificate . As it turns out, I don’t have to go to the dreaded Department of Vital Records. The correction form can be submitted directly to the hospital where Samara was born. So off we went, incorrect birth certificate in hand, on a journey to the Upper East side of Manhattan where Samara’s birth hospital was.

Since we were taking the train, I told Ari we should take the stroller. He objected and insisted on taking his scooter. I said that was okay, as long as he didn’t ask me to carry him at any point during the day. The deal was he had to ride or walk with his scooter the whole way. He agreed. 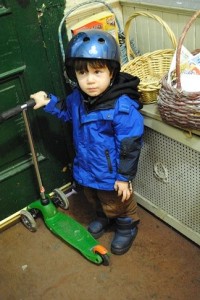 When we got to the train station, I asked a random stranger to take a picture of us to document the journey. I was thankful that he didn’t steal Wil’s expensive camera. I’m sure we looked like tourists even though we live here. 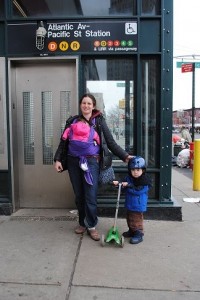 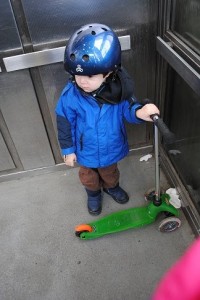 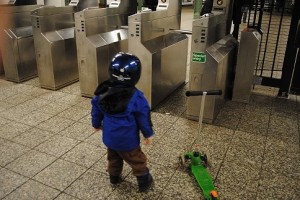 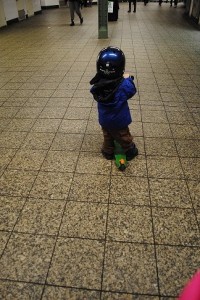 At this point we were ready to take the elevator to the 4/5 train but then we saw this terrible sign: 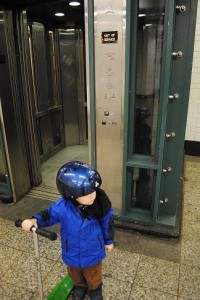 You can’t see it, can you? Here’s a closer look: 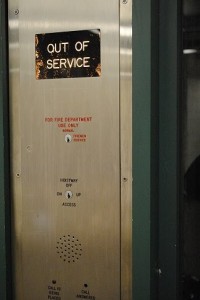 I was actually glad that we took the scooter at this point because I didn’t have to lug the stroller (with Ari in it) and the baby up these stairs: 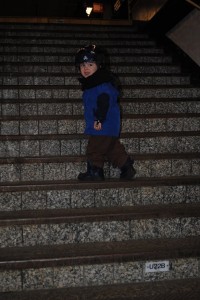 Ari hapilly walked up the stairs. He was so psyched to get on the train, that he didn’t care about the copious amount of stairs he had to climb.

When we boarded the train, Wil’s “fancy” camera died, so I used my camera phone for the rest of the pictures to document our journey. Here’s Ari looking stoic on the subway: 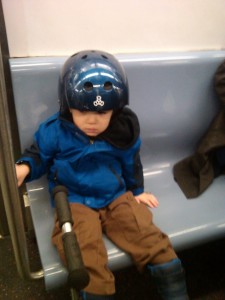 When we got out of the subway, it was raining. Ari boarded his scooter and we zoomed up the street into the hospital. We made it to the Birth Registrar! 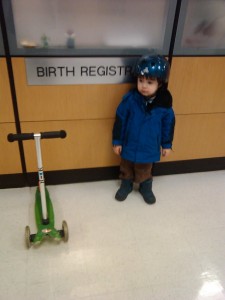 Cynthia, the Birth Registrar, told me that I didn’t have to pay a thing to fix the birth certificate since it was a hospital error! I was excited. We called Mint and decided to celebrate at a kid-friendly diner near the hospital. Despite the fact that the diner was only a few blocks away, it took us half an hour to meet her there. Traveling with two small children takes infinitely longer than traveling by one’s self. 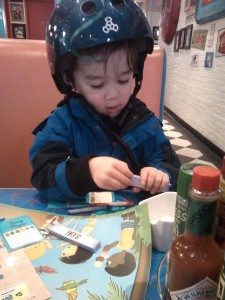 Ari made a friend at the restaurant: 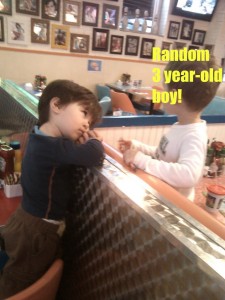 By the time lunch was over Ari was tired, Samara was cranky, Mint had to go to work and it was raining. All those factors considered, we did the unthinkable for me, we took a taxi home! I know, it’s expensive and I never do it. As we were standing on the corner, a woman went to get in the taxi that I hailed first. She wasn’t trying to steal it, she obviously didn’t see us because she was holding an enormous umbrella that blocked her view. I offered to share the ride downtown with her.

Ari was excited to be in a car of any kind. 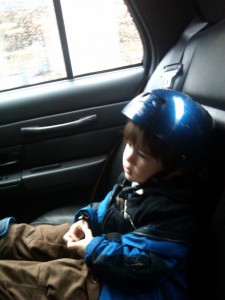 On her way out, at 35th Street and Lexington, she handed me a $20 for the ride. I asked her if she wanted change, her ride was only $7.00, but she said “keep it!” I thanked her profusely as she exited the cab.

We’re home now, Samara is sleeping and Ari is watching Max and Ruby. I feel a strange sense of accomplishment. I went on a mecca with two small children, I avoided a government office and a bogus fee, and I am one step away from receiving a correct birth certificate for my almost seven week old baby! Lastly, I accomplished all these things in a torrential downpour.