Home/Uncategorized/Potty Training Day One Part One
Previous Next

Since I’m bored and depressed, I decided that the next logical step to combat my SAD (Seasonal Affective Disorder) was to start a project: potty training Ari.

This morning, I informed him that I was going to change him.
“I don’t want to change!” He said, a familiar saying of his.
“What if I told you, you didn’t have to wear a diaper?” I asked him
“Huh?” He replied quizically.
“After I take off your diaper, you don’t have to put a new one on.” I said.
“No diaper?” He asked thoroughly confused.
“Yes. Would you like that?” I asked
“Yes!” He confirmed.

For the next several hours, he peed in corners, on his Thomas sheets, on the couch and each time he said one of the following:
“I went pee!” “I peed on my leg!” “I peed on Thomas [insert hysterical laughter].” “I pooped.” He didn’t, he just peed.

Wil and I kept putting him back on the potty at regular intervals and bribing him with food (cookies) or TV to sit/produce something on the potty. Okay, maybe the cookies weren’t such a great idea, but I was at the end of my rope with all the pee everywhere.

My great friend Donna was here, and in between drawing an elephant and two cats for Ari on his easel: 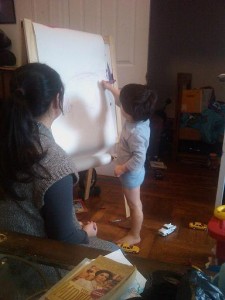 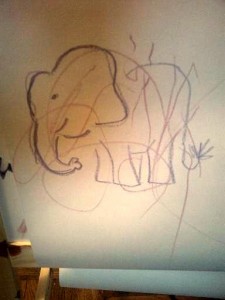 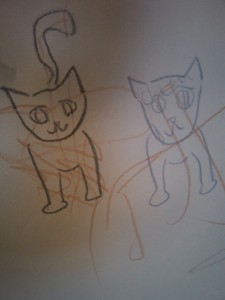 She read online that this naked method works best if you have the kid “help” you clean up after they pee/poop on the floor. Then take them to the toilet.

At one point after he had peed on the floor, I took him to the potty, and I had to hold him in place on the toilet as he was screaming:
“No, no no!”
Yeah, that wasn’t exactly a shining mothering moment for me.

Then something exciting happened- can you tell I have no life? Ari opened the bathroom door and, of his own accord, got onto the potty, and sat there himself! He didn’t really do anything, but it was a start!

Wil announced that he had an idea.
“I have an idea, I’ll be back in ten minutes, trust me.”
He was gone for 20 minutes and came back holding this: 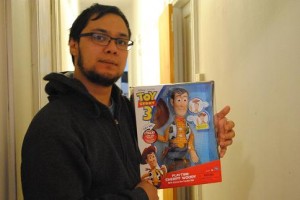 “Ari, if you poop on the potty, you get this!” He said holding up the box.
Immediately Ari made a bee-line for the potty and gave it all he had. 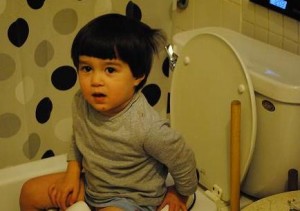 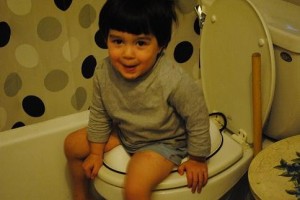 But still nothing. To be continued…