I got home last night from Mint’s wedding (which was so much fun by the way) and immediately checked the mailbox. I found this: 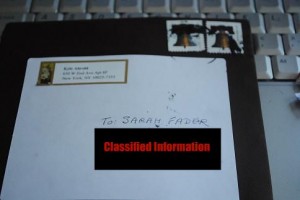 I opened the envelope to find this: 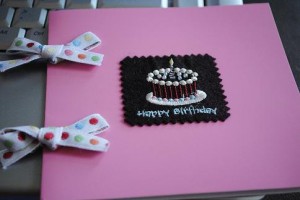 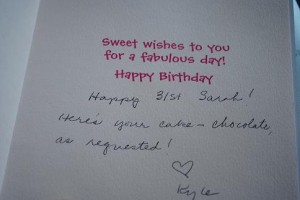 Thank you Kyle! Kyle, whom I have known since I was around seven years old. Thank you for a wonderful start to my birthday! And look! I already got my chocolate cake.

That was last night. This morning at 5am, Wil woke me up out of a deep sleep to which my repsonse was:
“WHAT?!”
“Happy Birthday!” He exclaimed and gave me a kiss.
I guess he was so excited about my birthday that he couldn’t sleep. So he went to the kitchen and made some eggs. Ari realized that Wil wasn’t in the bed, and woke up saying:
“Daddy? Daddy!” Then he demanded to watch Blue’s Clues. Wil obliged him and I went back to sleep. Later I found out that they had not watched Blue’s Clues, but rather Terminator 2 because Ari was demanding to see “robots.“

I slept till 8:30am. When I woke up, I found Wil and Ari back in the bed, but I can’t remember how or when they got there. It’s now 10:32am and they’re still asleep. More later.

It’s now 12:20pm. Ari is watching the same episode of Max and Ruby over and over again. Ari and Wil woke up at 11:15am. I made coffee and eggs. Ari keeps insisting that it is not my birthday, but his Uncle Jonathan’s birthday instead. We are planning to go to the movies at 2:30pm. My parents are watching Ari.

After the movie Wil treated me to a pedicure and a ten minute massage at a local nail salon.
Then we rushed home and had a pizza party ending in chocolate cupcakes hosted by my parents and attended by friends and family.

All in all it was a wonderful birthday!