I was on Twitter one day when I noticed a mama blogger named Babe_Chilla (she’s super cool and from Canada- of course) posted that she was making Mexican Stuffed Peppers. I was intrigued. So, naturally, I harrassed her insesssantly (Jewish mother that I am ) until she emailed me her recipe. She actually MADE THIS RECIPE UP and I have to say that it is really yummy and vegetarian!

I am going to share the recipe with all of you!

Ingredients:
Rice (I used approximately a cup of brown rice)
Can of Diced Tomatoes (She used spicy red pepper ones, I used regular diced tomatoes)
6 peppers (She used 2 of each, orange, yellow and green, I was lazy and used all green bell peppers)
Small Zucchini (I had an enormous zucchini, so I used it)
Half an Onion
Can of green chilli’s (I used 3 fresh jalapeno peppers, and diced them up)
Can of Black Beans (drained)
Small can of Corn (drained) (I used frozen corn)
1. Cook 1 cup of rice (as per package directions) with the can of tomatoes. (She used 1/4 cup less water) let the juices of the tomatoes into the rice and water.
2. Remove tops of peppers and set aside; gut the peppers.
3. In a large frying pan, fry up diced onion, diced pepper bits, diced zucchini. Add corn, black beans, chilli peppers, salt & pepper.
4. Add cooked rice to pan (She did it slowly it could easily be stirred in)
and combine mixture.

*Note: Here is what the mixture looked like pre-stuffing: 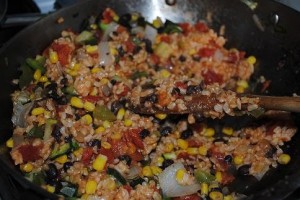 5. STUFF peppers as full as possible, and set upright in a dish.
6. Top with salsa and cheese. (I did not put salsa on them until after they were cooked. Cheese, on the other hand, I was not shy about)

Now hold on! They’re not finished yet, but let me know you a picture of them before they go in the oven: 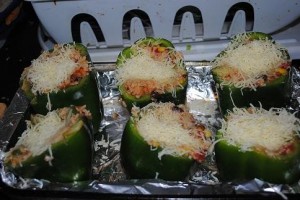 7.Bake in the oven at 350 degrees for about 20-25 mins. ( I cooked for 25 minutes. The peppers were aldente at this point, still delicious though! I’d say you could go another five minutes and make it 30 if you wanted them a little softer. Why not?)

8. Serve with salsa and sour cream 😀

Here they are just out of the oven: 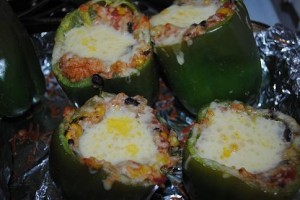 They were a hit in this house, even with my carnivore of a boyfriend! Oh and when you add the sour cream and salsa, they are to die for!

If you are interested in reading Babe_Chilla’s blog, Chilla Mama Chill, which (by the way) is hilarious, click here