When I became a mom, I was forced to come to a harsh realization: just because you’ve had a child (as I have) does not mean we can automatically be friends. I’ve had a hard time finding mom friends that I connected with.

Similar to my “real life” experience, I’ve also had a hard time finding mom blogs that I like. When I do find one, I latch onto it like a nursing babe.

This is how I feel about Jessica Bern’s blog, Bernthis.

I love this woman. Guess where she’s from? One of my favorite countries: Canada!

She created the “Bernthis web series” which are hilarious anecdotes from her life. One of my favorites is called “Born Stupid.” It’s about the fact that she is the youngest sibling in her family and the dumbest. She became an actress, while her sister became a pediatric gastroenterologist.

Ms. Bern agreed to answer a few questions for us about her life and blog. I’ll let Jessica reveal the rest! Here’s what she had to say:

1. Jessica, you’re funny. Do you think being a younger sibling had anything to do with the fact that you’re hilarious?

My place in the birth order only solidified that I was bound to be the dumbest in my family, according to an article in Time magazine. My webisode, “Born Stupid” was based on this premise and sadly it seems to be true. My sister is a pediatric gastroentorologist (I’ve now tried to spell that three times and I still haven’t gotten it right). My middle sister has a masters in public health from John’s Hopkins and then there is me, the blogger. Can you hear my parent’s crying right now? I can.

2. What inspired you to create the “Bernthis Web Series?” Tell us about it?

The web series came about because I’d written these essays about my divorce and someone suggested turning them into videos. At that time, my career in advertising had cooled quite a bit as it seems, an angry, bitter about to be divorcee wasn’t very “hot” at the time and I figured why not, so I hired an amazing director/editor and off we went.

3. Describe Phoebe, your daughter, in three words, what would they be and why?

4. If you were forced to teach children, what grade would you teach and why?

4. Forced, would be the correct word, as technically, I’m not really a kid person. I love mine but chances are yours will annoy me, especially if I’m trying to talk to their mother and they start whining over stupid things like how they haven’t been fed in three days or they’re not feeling well, even though they haven’t puked in well over an hour. You know, stuff like that. However, if I had to pick a grade I would say I would choose fifth or sixth grade. At that stage they still have and iota of respect authority and you can have the greatest impact on them. By age 12, the hormones kick in and well, God help us all.

I love Canada. I was Canadian until 2000. I would love it a lot more if the draft was reinstated, that I can say for sure. I love the people there. I do. Especially now that my uncie is gone. He was a total asshole to my dad and ever since he kicked it the nice factor in Montreal alone has grown exponentially.

6. Why do you hate cottage cheese?

I don’t hate cottage cheese. Cottage cheese if you can hear me, I mean that. I just don’t have the desire to eat four pounds of it a day like I did when I first found the lactose free version.

I am Jewish, yes. I have great admiration for all my people have been through although I will never get over the fact that if they’d only had a few more minutes, I wouldn’t have to give up pasta for 8 days straight and we wouldn’t have to deal with all this “Kosher for Passover, warning, it’s tasteless” stuff at all.

8. Where in Canada are you from?

I was born in Toronto although with my mouth you’d start to wonder if Toronto was a small island located in the middle of Brooklyn.

I came to the US when I was almost two years old. It was hard. I was really close with a lot of 16 month olds I met in this one playgroup. Great bunch of folks. I think what I miss most about that is our game night. We played, “puke on the most expensive thing in your house.” It was hilarious although our parents never seemed to find the “funny” in it.

I’m a Cancer. I had a one out of twelve shot that I would be born under a sign that would remind people of the loss of a loved one every time I said it and yay me, I “won”. Vegas, here I come. I’m thinking of taking the title to my home and putting it on “red.”

And now, for your viewing pleasure, here is “Born Stupid” from the Bernthis web series!

To read Jessica’s blog or watch more of the Bernthis web series, click on the burnt toast below! 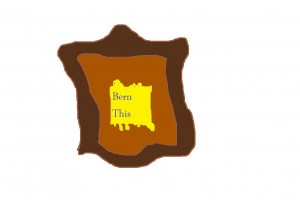