This morning, I feel okay about Wil’s night shift. The reason I feel alright about it is because of something called “The Couple’s Journal.” I recently wrote a post complaining about my boyfriend (Wilhem’s) night shift. Click here to read it.

Essentially the gist of the post, if you are too lazy to read it, is that Wil works from 8pm to 5am in the morning. I never see him at night, and he sleeps during the day. It’s a really lonely and frustrating situation. In the post, I asked if anyone had been through a similar experience:

My brilliant friend, Amanda, who writes Stumptowncrunch, posted a comment that said the following:

YES! The first year of our marriage Yasir worked from midnight-8am, slept for 3 hours, worked his second job from noon to 8pm, slept for 3 hours, and started all over again. We’d keep a “couple’s journal” that we wrote in since we’d often go a week or more without seeing each other’s faces (I worked and took night classes 5 days a week) so it was hard!!!

I found an old journal in my bookcase and I placed it in the most obvious place I could think of that Wil and I both frequent: the bathroom: 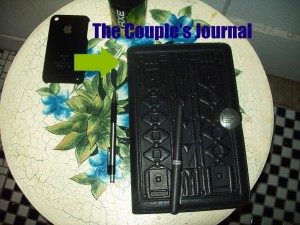 I have to admit, when Amanda suggested the Couple’s Journal as a solution, my immediate thought was:

I know I’ll write in it. But Wil probably won’t.

So I took a shot at it. Last night I wrote Wil a note in the journal about how difficult Ari was being, and how he kicked me in the face and all he wanted to do was watch TV. I wrote about how tired I was and how I missed him.

The next morning (today) I awoke and asked sleepy Wil if he wrote in the journal. He mumbled “Yes.” So I went into the bathroom to check it out.

Low and behold he did write in it! And it was a long letter about how work was boring and how he hated his shift. He even drew a picture of all three of us: 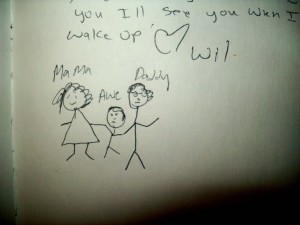 So far I like the Couple’s Journal. Thanks Amanda!