Home/Sleep/Going Berserk Instead of Going to Sleep
Previous Next

In my almost two years as a parent, I have NEVER seen anything like what I just witnessed. I tried to put my son to bed, and he went completely insane. He kicked me in the mouth (my lip is now swollen), hit me in the face and his limbs were flailing everywhere so much so that I had to move out of the way to prevent further injury to myself.

Wil is at work on the night shift and I am here with my son alone. I am really confused by the fact that someone so cute could go that berserk. 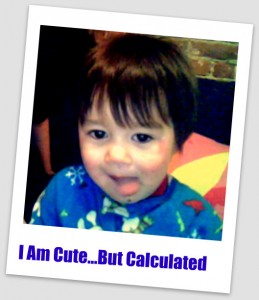 He was freaking out because he didn’t want to go to bed. And (unfortunately I am so ashamed to admit) he has become completely addicted to the TV show Yo Gabba Gabba, and insists on watching thousands of episodes of it before he passes out from exhaustion on the couch on some part of my body.

What happened to my child who was virtually unaware of the television?

Anyway, I tried to put him in his bed about six times and he busted out of his room. So I tried to lay down with him in my bed and he just screamed and injured me some more. Motherhood is glamorous isn’t it?

So folks, what do I do?
–How do I wean him off the crack that is television (which, by the way, I blame Wil for hooking him on)?
–How do I get this child to sleep at night, which he has stopped doing?
Please help!