Today, after I went to have the rubber band procedure performed on my giant hemorrhoid, I stopped into Duane Reade to decompress and spend as much money as possible on cosmetics. It’s a good thing I just got my tax refund! I spent over $80 and here’s what I got: 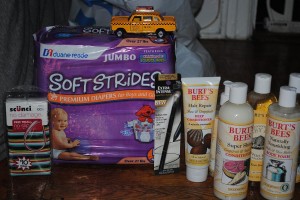 Included in today’s purchases at Duane Reade was a small toy taxi for Ari. Instrumental in this purchase was a really kind Duane Reade employee. I was standing there looking at all the toy cars debating which one to get for for my kid. The nice young man who worked at Duane Reade suggested I get the taxi because little kids love brightly colored things.

We got to talking and I asked this fantastic Duane Reade employee his name.
“I’m Ari.” He said.
I asked him to repeat himself so that I could verify this information, just to make sure I wasn’t hallucinating. Indeed he said his name was Ari. 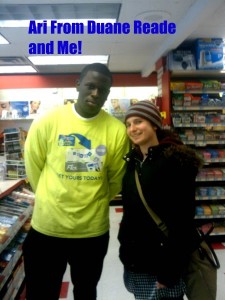 “My son’s name is Ari!” I said. I asked him if he knew what his name meant and he said:
“My mom told me it’s a very powerful name. It means ‘lion of G-d.”
I immediately showed him pictures of my Ari. Then he asked me:
“When is Ari’s birthday?”
“May 6th.” I replied.
“No way!” He exclaimed. “My birthday is May 17th!”
Both my son, Ari and Duane Reade Ari are Tauruses!

Ari told me a little more about himself. He is half British, his father is from New Castle, England, he is studying communications at Brooklyn College and wants to be a Sports Newscaster one day. Like a good Jewish mother I encouraged him to stay in school.

After meeting Ari I left Duane Reade and checked my cell phone for messages. I received a disturbing email from Mint with a subject line that read: “A Sad Day” I clicked on it instantly, only to find this link:

Yes folks, Duane Reade is going to cease to exist. I must have sensed something was going down, because I felt compelled to purchase a tons of items from Duane Reade today in particular. It truly saddens me that Walgreens, a scary corporation, is buying out friendly New York-based company Duane Reade. Mint was right, it is a sad sad day.

So, I decided to grab a slice of pizza and a Boylan’s Ginger Ale at Two Boots, another local New York business, to console myself about the end of the Duane Reade era. 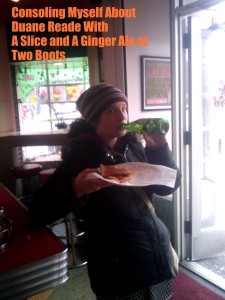 I was so upset I asked a stranger in line how he felt about the buy out. His reaction:
“Duane Reade is from New York? I thought Right Aide was the New York Pharmacy.” I wanted to cry. Clearly, this man was an unfeeling soul and probably not from New York.

The owner of Two Boots, however, understood.

“I remember when Woolworth went out of business,” He said “This world is all about greed. People ask me why I don’t stay open later at night, till 2am. They say I could make more money. I tell them, I don’t need the money that badly. There’s always tomorrow.”

RIP Duane Reade, you will be missed by this New Yorker.