I just had a 20 minute conversation with Ari. I have no idea what we just talked about. He was going on and on about something, but I could only understand about 15% of what he was saying. 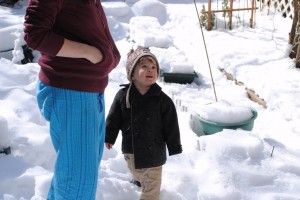 I replied:
“Uh huh…so if I’m understanding you correctly, today you saw a boy, three babies, and you asked daddy to draw a dog and he did?”
He replied
“Dee!” (Yes).

But then he went on and on in “Ari-ese” (his own language) babbling in an indecipherable manner.

It’s really difficult to understand what he’s saying. Am I slow? Is there something wrong with my hearing? Is he actually talking and I’m not catching it? Is he developmentally delayed? Should he be talking already with real words? Thoughts?