Today my son and I were rushing out the door. I was in such a frenzy, that he fell down a small flight of stairs. I was horrified. I wasn’t expecting that to happen.

Here’s how it transpired: he was taking forever to leave the apartment. I told him over and over again:

Finally I opened the apartment door and he stepped through. He approached the stairs and I said to him, rather sternly:

“You’re going to walk down the stairs now!”

And all at once, and I am not remotely exaggerating, he threw himself down a small flight of stairs. I screamed! I felt awful. I was in such a hurry to get out of the house that I caused him to fall down the stairs. 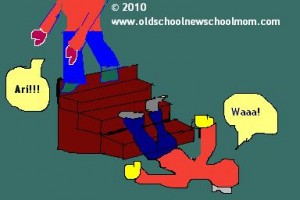 Later on, I was recounting the story to Wilhelm. I asked my son: