I left the apartment today to go to a doctor’s appointment in Manhattan. Wilhelm, Ari’s daddy, was watching Ari. My parting words to him were this:

“When I come home, I don’t want to see the television on.”

Wil has a habit of resorting to the television as an instant solution to a cranky toddler. When our son freaks out, he turns on “Blue’s Clues” in an attempt to soothe him. I don’t agree with this method, and have been telling him to stop using TV as a pacifier. Well, it turns out, he listened to me! Instead of using the TV he let my son and his friend, Simon the cat, look out the window! 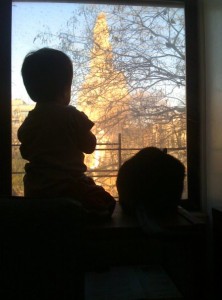