Home/Uncategorized/Distraction By Banana
Previous Next

Lately, feeding my child has become very difficult. The reason being that he insists on feeding himself. Now I know that this is a natural and welcome stage of development; however, I have noticed that sometimes he has unreasonable expectations with regard to his self-feeding methods.

For example, today I was attempting to let him feed himself oatmeal. He was just about to shove the spoon of oatmeal into his mouth when he noticed that I was spooning some yogurt into a bowl for my own breakfast. He began vocalizing, loudly, that he would like some yogurt. So I swapped out the bowl of oatmeal for the bowl of yogurt. I don’t mind a trade, if that’s what it takes.

He was still not satisfied. He wanted BOTH bowls of food on his tray. Though I explained to him that that they would not fit, he kept insisting. So I showed him with tangible evidence that his plan was physically impossible. 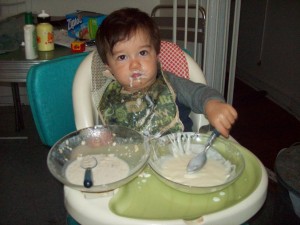 Having proved my point, I then I took the oatmeal away. This did not go over well. 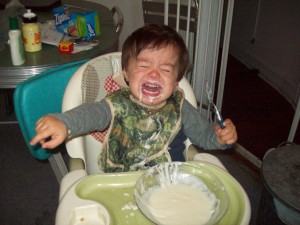 In moments of crisis, thinking outside the box can only help. I frantically looked around the kitchen for a solution. I found one in the form of a banana! 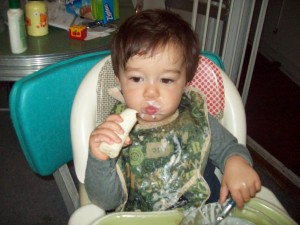 Upon being handed a banana, he forgot all about both the oatmeal and the yogurt. 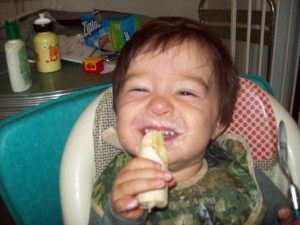 I am now a firm believer in “Distraction by Banana!”