Somehow, my son knew that today was a special day; and it was. Today was the day that we were headed to Hicksville, NY. Why Hicksville, you might ask? Because his resourceful mother had gone on craigslist and located a mother of four who was selling none other than the Little Tikes Cozy Coupe for a mere $15! The very same plastic car that my little man had become so obsessed with just a few days ago. He was so taken with this car that he tortured two children just for the privilege to sit in the thing. (see previous blog)

When we got to our car, he could barely contain himself. 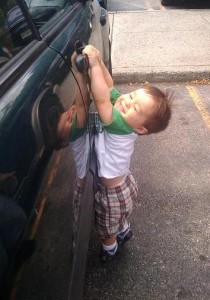 We drove and we drove. We got lost quite a few times. We argued about who knew which direction to go and what exactly constituted a driveway. It was rough going there for a while, but finally we arrived in Hicksville. My son and his daddy immediately hopped out of the car and began to enjoy the green surroundings. 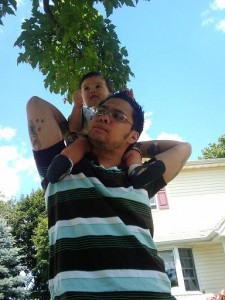 When we arrived at the house in question, there was a note on the door:

So we took the opportunity to decompress from our long drive and from yelling at one another.
I have to say, Long Island does have some nice greenery to offer its visitors.

Our mother of four returned and we headed to the backyard to meet the Cozy Coupe. When my son saw the car, he immediately recognized it. His face lit up.

“It’s a little wet from the rain, do you want me to wipe it off?” She asked.
“Sure!” I said. She went inside to get a paper towel. But my son was so excited that he couldn’t wait. He jumped right into the car and sat in a wet puddle in the front seat. The lovely woman returned and smiled at the sight of my child enjoying the car as much as her kids must have. 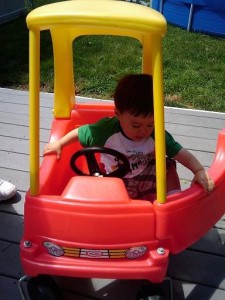 “Here you go.” I said handing her the $15 she was owed for the Cozy Coupe.

“Do you think you could take a picture of the three of us?” I asked her.
“Of course!” She replied 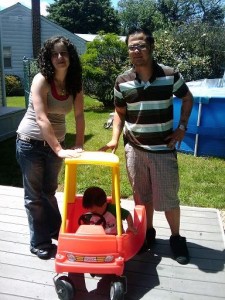 We said thank you and then attempted to take our son out of the Cozy Coupe so we could pack it up and head back to Brooklyn. He did not like this one bit. As soon as we removed him from the vehicle he screamed at the top of his lungs. Even when we got him into his car seat he was still crying and trying to reach the Cozy Coupe in the trunk. 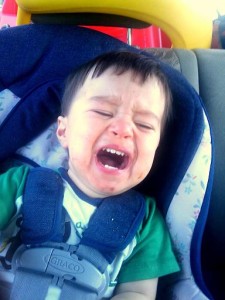 But all was well when we arrived back in Brooklyn. Cozy Coupe and my son were reunited and although there was concrete instead of grass, they were still having a good time together. 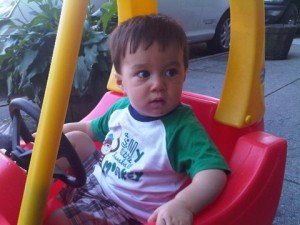 The journey to Hicksville, USA was a sucess! My son now owns the car that he tortured two children to get.