Greetings from sunny (sometimes rainy for five minutes and then sunny again) Puerto Rico! Where the natives love children and say things like: 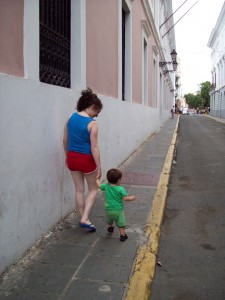 Puerto Ricans love children. I cannot tell you how many random people; people on the street people in restaurants, people at the bus station , even homeless people have gone out of their way to make comments about how cute my kid was. I even got a discount on a pair of sandals for my son because the sales people thought he was cute.

After we purchased the sandals a nice older woman approached my son and carefully disinfected his hands with Purell hand santizer because she saw him crawling all over the store’s floor and was concerned about germs. All the while she was repeating “Que lindo, que lindo.” – “How beautiful.”

It has to be a cultural thing. When I walk down the streets of Brooklyn, few strangers approach me to oogle at my child. But in Puerto Rico we can’t go a block without getting stopped by strangers who want to accost and touch my child.

It’s kind of nice actually, how much Puerto Ricans love and appreciate children. We attempted to go to their most prominent manifestation of their appreciation for children (Museo Del Nino- The Children’s Musuem) but it was closed today because it is Monday. Apparently (like many museums in The United States) The Children’s Museum is closed Mondays and open Tuesdays thru Fridays. But we did get a fun picture in front of the musuem. 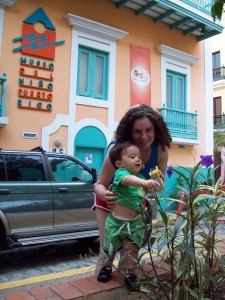 We intend to try to revisit this museum tomorrow when it is officially open. Until then, we will just pass by more random strangers who will bless us with their love of children.

More on Puerto Rico to come…