My son and I are big fans of the TV show Blue’s Clues. The show first aired in 2001 with a host named Steve Burns. For those of you that have been following my blog, you know how much I love Steve. 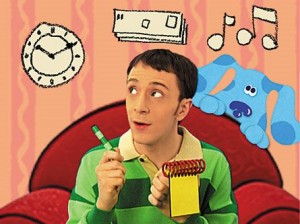 Steve is a charismatic and highly engaging host. He calls the viewer a “friend” and makes one feel as if you are involved in his adventure. The adventure: solving a puzzle based on three distinct clues that his dog, Blue, has laid out for us; “Blue’s Clue’s”

I have been watching re-runs of the show (as it no longer airs new episodes) on Noggin. I noticed, somewhere along the line, that Steve is mysteriously no longer on the show. He is replaced by a fellow named “Joe.” 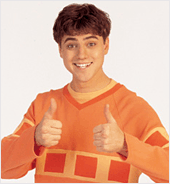 The Joe episodes of Blue’s Clues are okay at best. Let’s face it, he is no Steve. But the lingering question in my mind was: how did the show introduce Joe to the kids who were long time Blue’s Clue’s fans? They had known Steve for such a long time, it must have been tricky to do.

Well, I finally got my answer yesterday when I caught the episode:

Meet Joe Scrapbook Adventure. The episode introduced Joe to the kids as Steve’s brother. The episode itself is an hour long, giving the viewers a chance to play with and get to know Joe. We even get to play a round of Blue’s Clue’s with both Steve and Joe together. 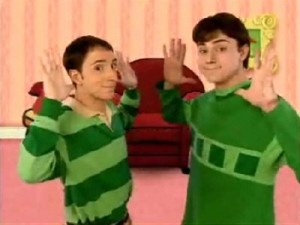 After playing a round of Blue’s Clue’s with both hosts, Steve announces that he has some exciting news; he is going to college! The viewer learns what college is, where he will be staying and that Steve will keep in touch via letters and the telephone. The whole episode was executed so well. 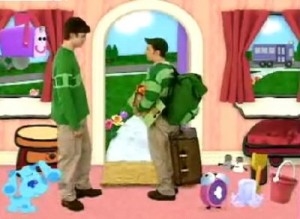 I was really impressed with how the producers of the show handled Joe’s introduction. It was done so gracefully and with such empathy on behalf of the children who had come to know and love Steve for years and years. There is even a special message to Steve in the credits of this episode thanking him for his work on the show. Joe’s introduction really furthered my love for Blue’s Clues.