The short answer to this question is because my son loves him.

For those of you that don’t know, Steve Burns is the former host of the children’s television show “Blue’s Clues.” The show no longer airs new episodes, but reruns are on Noggin every morning from 7am – 8am.
Blue’s Clues is an educational show that is meant to teach young children (mainly pre-schoolers) a variety of things ranging from counting to where the planets are in outer space.

Even though cognitively, my son doesn’t get a lot of what is going on on the show, he really enjoys the songs associated with Blue’s Clues as well as the fact that it is highly interactive.

The host, Steve Burns, known to the audience simply as “Steve” is very charismatic. The premise of the show is that he is looking for three separate clues in order to figure out a puzzle. Along for the ride is his dog, Blue. Hence the name “Blue’s Clues.” 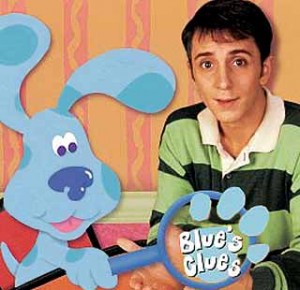 The show aired from 1996 – 2006. But Steve left the show at some point and was replaced by a character named “Joe” who in my opinion is no Steve.

When my son sees Steve ask a question or sing a song, his face lights up. He even starts bouncing to the beat of the music.

I thought it might just be the show itself that he liked, but he truly can tell the difference between Steve and Joe. He is not engaged very much at all when he watches the “Joe” version of Blue’s Clues. But he goes nuts for Steve.

Steve Burns, I’d like to thank you for entertaining my son. I wish your career still consisted of entertaining babies and toddlers, but I know you’ve moved on to bigger and better things.