As a new mom, I would like to think I have it all figured out; I don’t need anyone’s help. It doesn’t matter that I’ve never done this before. I know my son. I understand him. Every single time he makes a peep realize exactly what he wants. I never crack under pressure while he’s crying his head off. Can you tell I’m being facetious?

The point is, at these crucial times its okay to accept help from those who have been there before; the grandmas.

Recently, my son had a terrible virus. He had a fever and was horribly congested. He was so congested, in fact, that he could hardly nurse and could wake himself up in the middle of the night coughing. Once again, I adopted my “I can do anything I’m Super Mom” attitude. I tried everything:

My mom saw how exasperated I was becoming. She popped her grandma head into the picture and announced

“Can I make a suggestion?”

Normally when my mom says this it is not a suggestion at all but a “you really need to do this.” I all but rolled my eyes. Through clenched teeth I replied

She smiled and said

Needless to say I ignored her suggestion and kept trying things that didn’t work. Until I got a call from my mom at 7:30pm at night after spending the entire day with a miserably sick baby.

“I have something for you. Can I come up to your apartment?” She asked.

“Sure.” I said totally exhausted.

The door opened. There was my mom standing there with a Vicks Cool Moisture humidifier.

Even though my son was already asleep we managed to covertly place the humidifier in his room without waking him.

Guess what? She was right. It was the best night he, my boyfriend and I had had in three days. My son didn’t wake up once during the night. Thanks to the humidifier.

Grandmas can be annoying. They think they know what’s best for their grandchildren and no one can tell them otherwise. But sometimes, they are absolutely right. So the next time your mom tells you

“Put some socks on him! Its cold in here.” Even though it may be 75 degrees, indulge her. She may save your life someday. (Or at least your sanity). 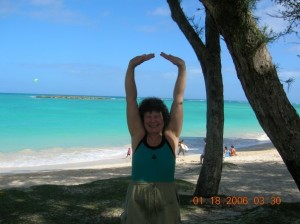